Our first full day in Cornwall we woke up to the brightest sunshine and loudest seagulls. It was a perfect day for attending the Minack Theatre’s production of Goodnight Mr. Tom.

First: the theatre! Have you heard of this wonderful place? It is literally carved out of the side of a cliff on the stunning Cornish coast (check out the Cornish language on the sign – a revival of this Celtic language is happening in schools!) 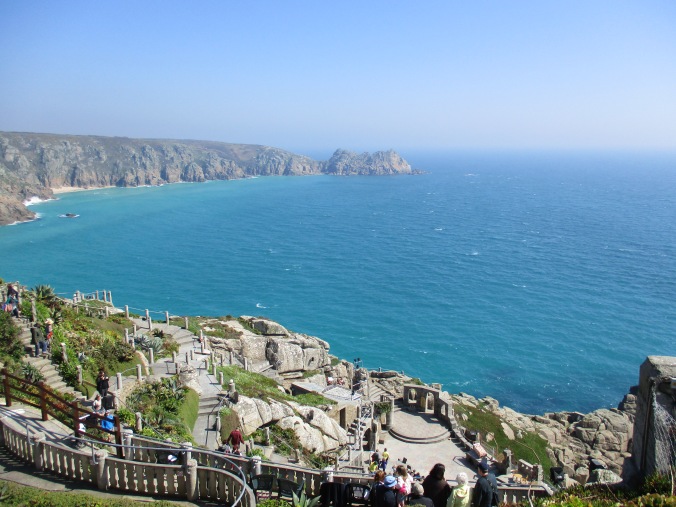 She sounds like the most amazing woman – she literally created the theatre herself with the help of a few workmen. She continued to work on improvements to the theatre for her whole life. Love this photo of her!

The theatre is located on a headland above the gorgeous Porthcurno beach. Rowena hauled sand up from this beach (!!) to mix with concrete and then carve into the beautiful walkways and seats and columns of the theatre.

The first performance in the theatre was in 1932. But additions and improvements are happening all the time! 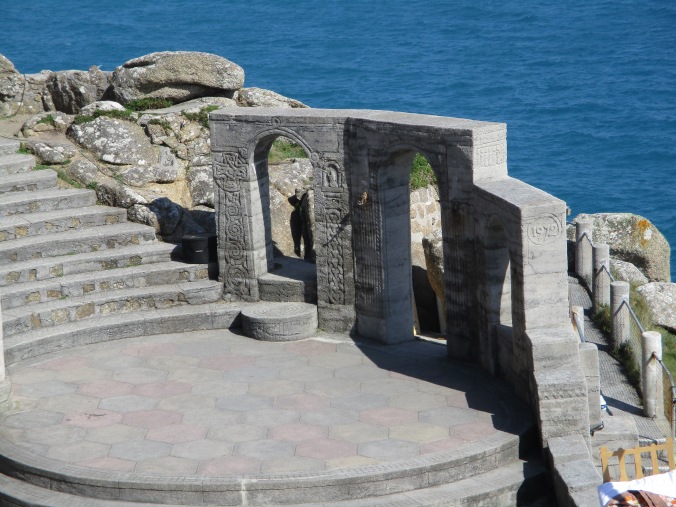 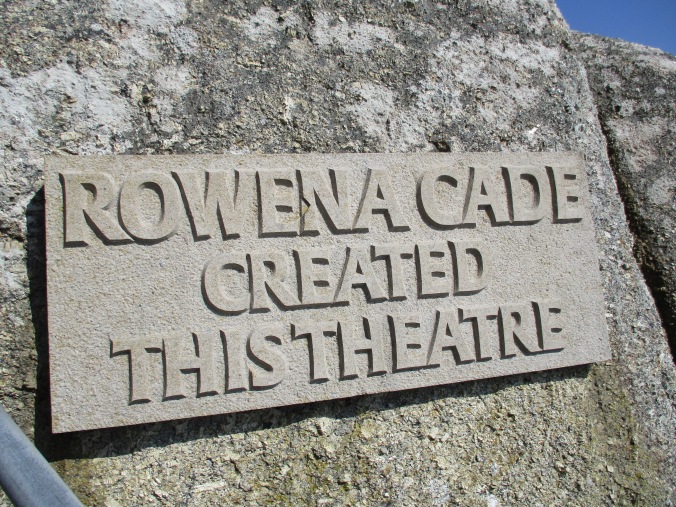 You can sit on the seats close to the stage or higher up. We got to sit up close and wound our way down, down the stairs to our grassy seat.

There are so many helpful ushers and workers in yellow shirts to help you get settled! 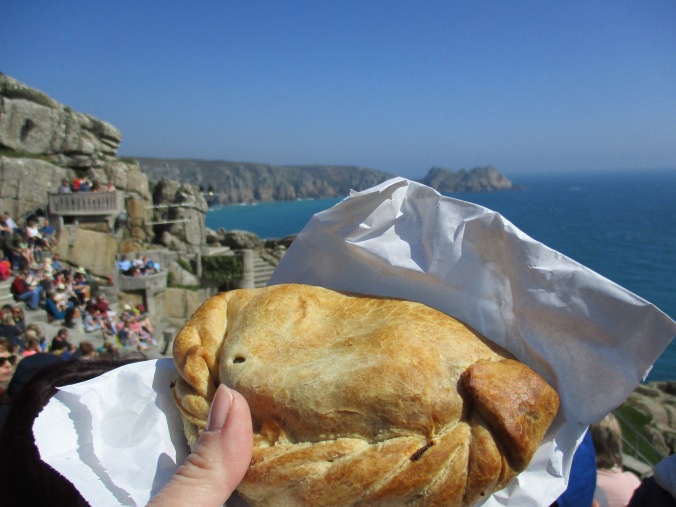 Steak and onion and delicious pastry! We bought it at Jessie’s Dairy by our house – Jessie uses her grandmother’s recipe for her pasties.

And look at our beverage of choice! Elderflower is very popular all over Cornwall.

And of course British crisps – they have the most unusual flavors!

It was fun to see everyone getting their first sun tans of the season as they watched the play.

But we had to put our coats on at Intermission – along with a lot of others. The breeze had sharp edge coming off the sea. 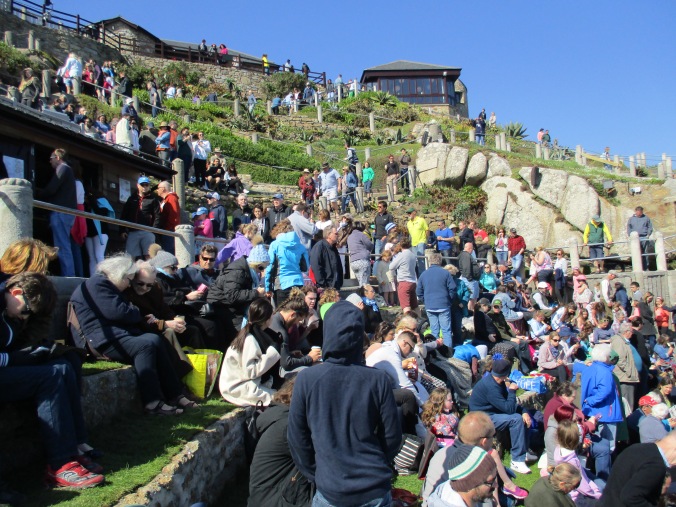 This is a true working theatre with such a variety of performances. You could come every week and see something new: https://www.minack.com/2017season/

Our play was very special: Goodnight, Mister Tom, based on the book by Michelle Magorian. 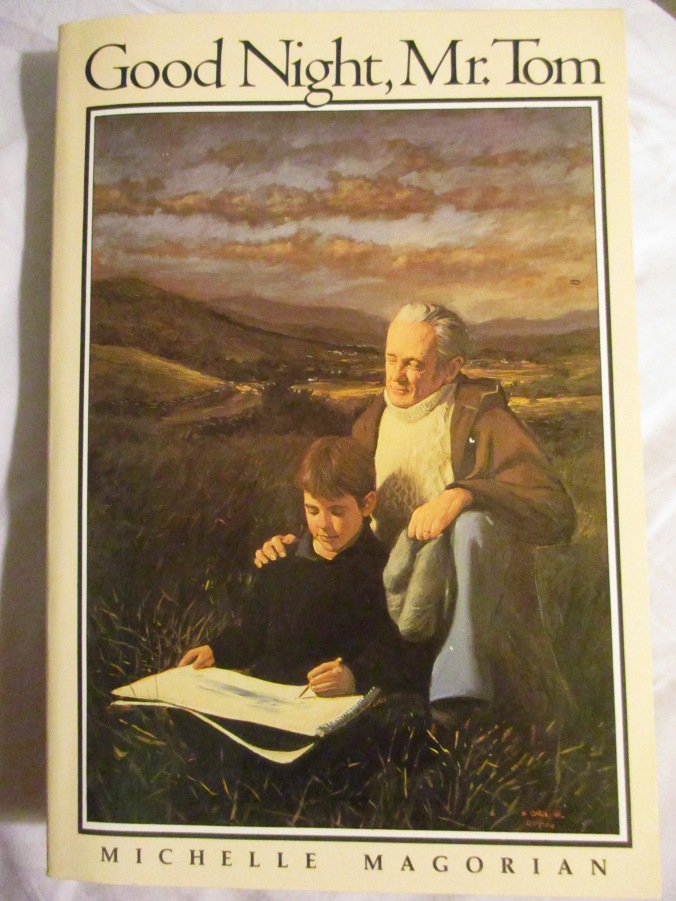 I loved this story when I first discovered it – I think I first saw a PBS production and then got the book.

The Minack Theatre production used some really fine child actors from Cornwall who played the evacuees and the children of the village.

We loved the man playing Mister Tom! And Sammy the dog was a puppet with two women bringing him to life. He was so life-like! 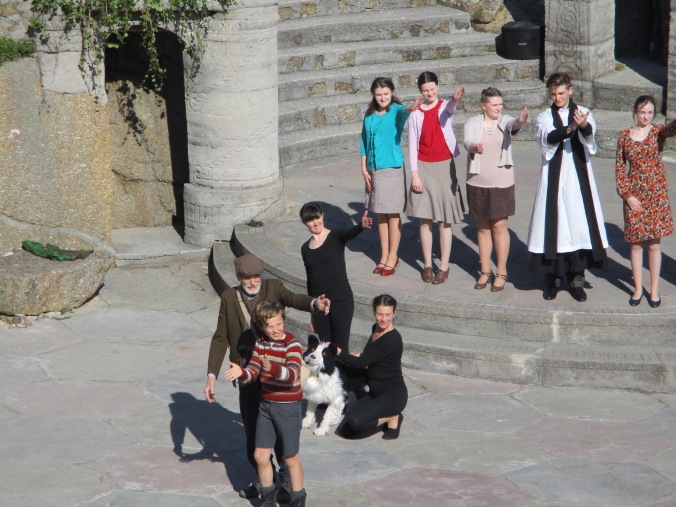 The little girl sitting next to us got a small dog puppet in the shop at Intermission that looked just like the Sammy on the stage. All the kids watching seemed to love the play, too. There was not a peep from any of them. The acoustics/sound system were wonderful.

A few days later we were talking to man who lived nearby who said, “At the Minack, it doesn’t even matter if the performance isn’t that good – you can just look out at the sea and think you are in the most marvelous spot in the world.”

So true! But this play was a good one. It was even featured in this month’s Cornwall Today magazine!

Rowena Cade was actually a billeting officer for evacuees during the war – she worked hard to find places for everyone to live and was apparently very persuasive.

Another war connection: when you look over to the cliffs leading to Logan Rock there is a white pyramid – do you see it?

This marks an important spot in World War II – the site of the Porthcurno telegraph lines that sent messages from Britain to its allies. If London had fallen, this would have been the sole communication point for the country.

Kim talked to one of the older Mousehole villagers the morning after we went to the Minack. He had heard we were Americans from Melanie. He said to Kim, “Been to the Minack? Good, good! Yah don’t have anything like that in the States, do yah?”

I don’t think we do!